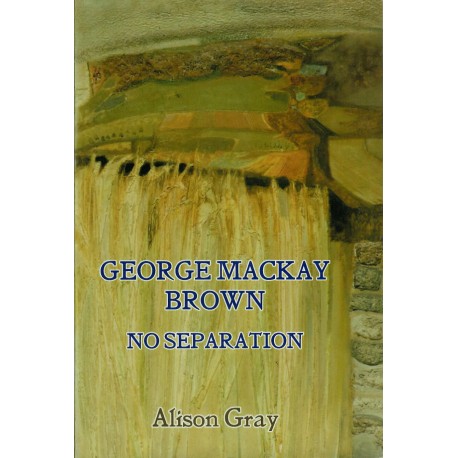 Alison Gray has written No Separation first and foremost as a faith story, opening up the Catholicism of George Mackay Brown that hitherto has remained quiet, unexplored and not greatly understood.

George Mackay Brown, the poet, novelist and dramatist, is seen by some as not just Orkney's, but Britain's best twentieth-century poet - widely praised by Ted Hughes, Seamus Heaney and fellow Orcadian mentor Edwin Muir. Many of his works are concerned with protecting Orkney's cultural heritage from the relentless march of progress and the loss of myth and archaic ritual in the modern world, a concern further influenced by his own conversion to Catholicism.

Alison Gray has written No Separation first and foremost as a faith story, opening up the Catholicism of George Mackay Brown that hitherto has remained quiet, unexplored and not greatly understood. Not a Catholic or religious writer as such, but treating all the subjects of literature as a Catholic would treat them, and only could treat them. She places George Mackay Brown's writings within an Orkney poetics, a shared Orcadian patrimony that is in touch with its own great past whilst simultaneously being deeply connected to the currents of theology and modern intellectual life in the twentieth century and beyond.

Alison Gray knew Mackay Brown personally from 1976 to his death in 1996. She has previously published Circle of Light: The Catholic Church in Orkney since 1560, received her doctorate on John Henry Newman and taught for many years in Catholic education in East London. Originally from New Zealand, she now lives permanently in Orkney.