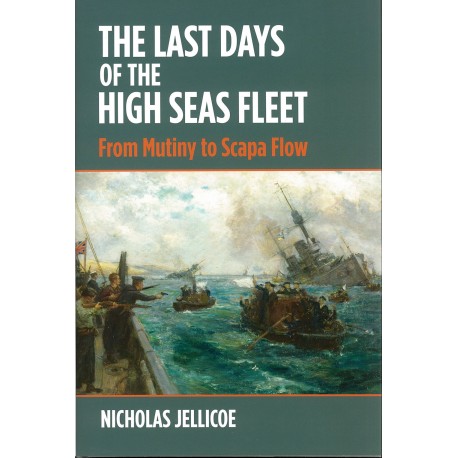 The Last Days of the High Seas Fleet

From Mutiny to Scapa Flow.

On 21 June 1919, the German Navy delivered to the British public the result that had long been awaited but not secured at Jutland: its annihilation.

Nearly half a million tons and fifty-four warships were scuttled on a calm summer's day in a gesture of Wagnerian proportions. For the Royal Navy this destruction was eventually accounted a blessing: for the Germans, the stain of surrender expunged. But at the time this cataclysmic event was seen as 'the greatest act of naval self-immolation ever known'.

This much is well-known, but even a century after the 'Grand Scuttle' many questions remain. Was von Reuter, the fleet's commander, acting under orders or was it his own initiative? Why was 21 June chosen? Did the British connive in, or even encourage the action? Could more have been done to save the ships? Was it legally justified? And what were the international ramifications?

This new book analyses all these issues, beginning with the fleet mutiny in the last months of the war that precipitated a social revolution in Germany and the eventual collapse of the will to fight. The Armistice terms imposed the humiliation of virtual surrender on the High Seas Fleet, and the conditions under which it was interned are described in detail. Meanwhile, the victorious Allies wrangled over the fate of the ships, an issue that threatened the whole peace process.

Using much new material from German sources and a host of eye-witness testimonies, the circumstances of the scuttling itself are meticulously reconstructed, while the aftermath for all parties is clearly laid out. The story concludes with 'the biggest salvage operation in history' and a chapter on the significance of the scuttling to the post-war balance of naval power.

Here is a fascinating reassessment of the last great action of the First World War.