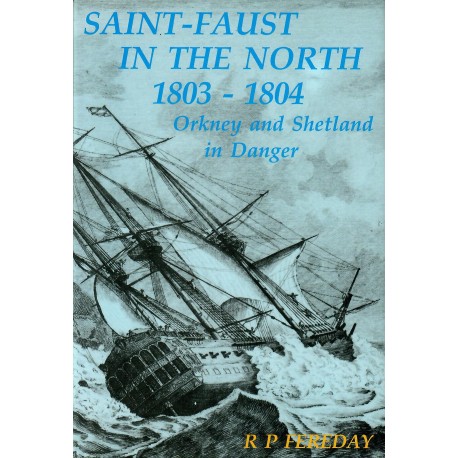 'Orkney and Shetland in danger'. The adventure of Saint-Faust, who temporarily diverted British Troops and created the threat of a potential attack on Shetland, Orkney and the North of Scotland with a small Franco-Batavian squadron during the Napoleonic War.

Early in 1804 the presence of a small Franco-Batavian squadron caused anxiety in North Britain. The enemy vessels carried some grenadiers (storm troops), and it was feared that a descent on Shetland, Orkney or the North of Scotland was imminent. This would be a terrorist attack or forlorn-hope designed to achieve a propaganda coup, create panic and divert British troops and warships northwards, away from the English Channel where Bonaparte hoped to strike the decisive blow.

The French commander of the 'Batavian Auxilliary Naval Force' that reached Bergen was Jean Jacques de Saint-Faust, an able, charming and unscrupulous officer. Though winter storms and the Royal Navy foiled the intended attack, Saint-Faust's escapade did create a temporary diversion. Both the man and his mysterious mission have been overlooked by Historians, yet the threat from Bergen deserves to be noted, particularly by those interested in Shetland and Orkney, Holland and Norway, or the Royal Navy and Bonaparte.

The aim of this book is to illuminate Saint-Faust's adventure - a delightfully unexpected episode in the Napoleonic War.