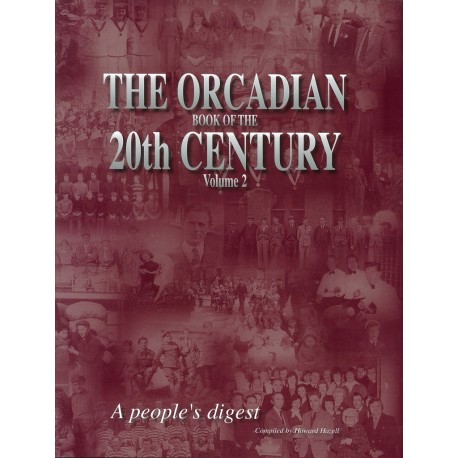 The Orcadian Book of the 20th Century - Volume 2

A true people's digest to be read and enjoyed by Orcadians, and lovers of the Orkney Islands, wherever they may be around the world.

Who was the fastest man on Earth and who were his Orkney family? Who was the Orcadian who accompanied Sir Henry Stanley on his search to find Scots missionary David Livingston in Africa? Who were the inspiring women from neighbouring Orkney parishes who were acclaimed as 20th century saints? How did a tribe of native Canadians settle a war with their own version of the Kirkwall Ba' game? Who was the Orcadian who built Scotland's first X-ray machine and the pioneer who went from stagecoach driver to member of parliament?

All the answers are to be found within the covers of this entertaining heavyweight volume.

The best-selling first volume of The Orcadian Book of the 20th Century (now out of print) was a chronicle of those one hundred years, featuring some of the major news stories that Orkney gave to the world during war and peace.

This second volume is a collection of stories about people who featured both in Orkney and around the world in what was regarded as the people's century.

It focuses on the momentous, the quirky and the everyday achievements of ordinary folk. It is a collection of heroes and villains, saints and sinners, the magnificent and the mundane.

There are tales of high drama on the high seas, epic recollections of Orkney mariners set adrift on thousand mile voyages in open boats, Orcadians who went to war in uniforms of the United States Army and the French Foreign Legion.

It is a book of headline-makers: the Orcadian who became chief of a Canadian tribe and won the Military Medal fighting for Britain under a future prime minister; the man who escorted the first British Queen on Orkney soil; the last British serviceman to have witnessed the Scapa Flow scuttle of the German fleet and the only Orcadian survivor of the Royal Oak disaster.

And there are stories of Orkney-based heroes in two world wars - the young man who became France's most decorated fighter ace and the pilot credited with ending the war career of the German warlord Rommel - and. more chillingly, the man who could have been Hitler's governor of Orkney if the Nazis had won the war.

It is a true people's digest to be read and enjoyed by Orcadians, and lovers of the Orkney Islands, wherever they may be around the world.