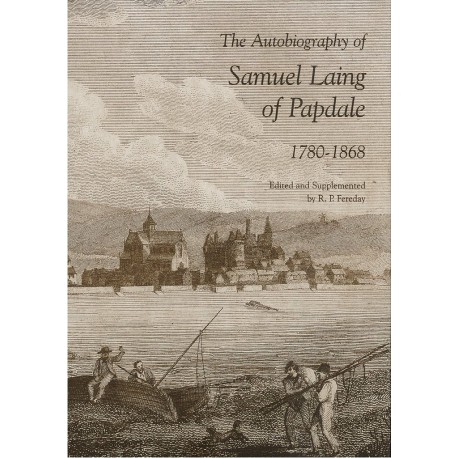 The Autobiography of Samuel Laing of Papdale 1780-1868

Autobiography written for Laing's family in the 19th century.

Samuel Laing of Papadale was remarkable for two very different careers. first he was a liberally-minded, public-spirited and popular provost of Kirkwall whose innovations in farming and fishing did much to lay the foundations for economic prosperity in 19th century Orkney. When kelp prices collapsed he ran into financial difficulties and, narrowly failing to enter parliament, he left Orkney to follow a quite separate career as traveller and writer.

Laing's books on Norway, Sweden and other countires were much admired in their time by politicians, economists and the general public. Recently there has been renewed interest in his observations and his provocative ideas. However, his greatest achievement was to make the first English translation of Heimskringla, the saga of the Norwegian kings. Ths work had enormous influences on Victorian Britain, remained the standard edition for over a century and is still highlt valued. Laing's success as a translator owed much to his Orcadian origins and his adventurous character. He had enjoyed living dangerously in occupied Holland and serving in the peninsular war, and he found it easy to realte to the saga's tales of brave deeds and fast moving action.

This autobiography was written for his family, incorporating good advice from which they might benefit. He comments very freely on his contemporaries and his lively memoirs, albeit partial and selective, provide a wealth of interesting information about his background and early life. He deals more briefly with his later years which his children could recall themselves. De Fereday, seeking to restore the balance, provides notes and supplementary biographical chapters based on a variety of other sources.