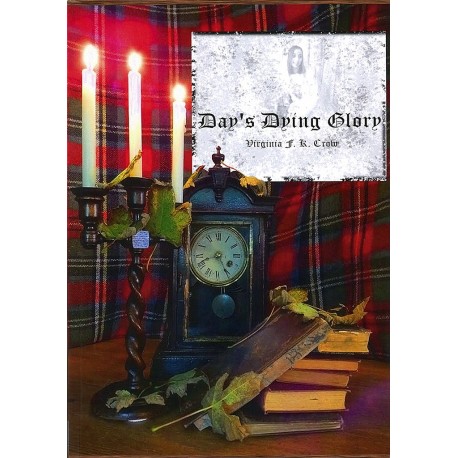 A thrilling coming of age novel set during the Napoleonic Wars.

By Virginia F. K. Crow, who grew up on Orkney.

Not daring to incur whatever force or feeling was causing his strange behaviour, she sat silently, waiting for him to speak first, but for all the money and promise in the world she could not have guessed the words he was about to speak.

Aside from living together in a comfortable home in the Scottish Grampians, Major Tenterchilt's three daughters seem to have little in common.

Influenced by her mother, Arabella aspires to be a wife and a lady, Imogen wishes to teach, while Cat always endeavours to be the son her father never had. The Major's sole stipulation is that they marry military officers.

As the girl's idyllic existence falls apart around them, they must overcome tragedies and challenges to find their place in a world where betrayal and secrets threaten everything they hold dear, and where no one is quite who they seem.

Day's Dying Glory is a story of how sisterly love can overcome anything, and a thrilling coming of age novel set during the Napoleonic Wards.