> Dialect and Language>Orcadiana: Pen Portraits of the Past 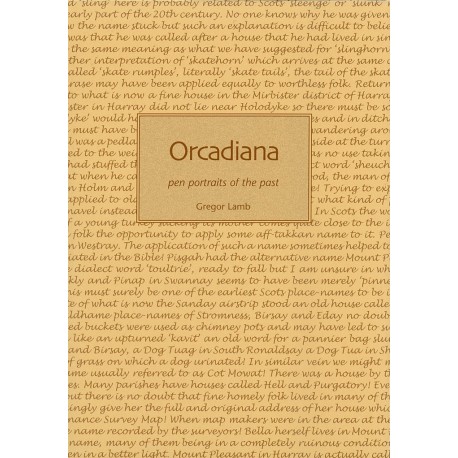 Orcadiana: Pen Portraits of the Past

A collection of more than forty articles by Gregor Lamb, covering language, history, folklore and placenames.

This book contains a collection of more than forty articles by Gregor Lamb, relating to Orkney and its northern neighbours and covers topics spanning a vety remote past up to the end of the 20th century.

Here you will not only learn something of the unique dialect of the islands but at the same time understand how the study of a local dialect can add to a greater awareness of how language evolved.

If the reader's interest lies in folklore, he or she will see how ancient pan-European beliefs persisted in the islands well into the 20th century. There are examples from die islands of how old taies take on new forms with the passage of centuries and even the exciting hint that the oldest story in English literature might have an antecedent in a fireside tale from Orkney!

In the section on History and Prehistory the scope of the writer's interest in the islands is really brought home to the reader when, atone end of the scale, he looks at the mysterious significance of the number three in the islands and, at the other, successfully solves the mystery of an aircraft which crashed near the family home when he was a child

In the articles on Orkney place-names he treads where few would dare, attempting to explain the puzzling name 'Ork' and he casts light on many of our island names, some of which are surprisingly "new"!

If the reader's family name is Rendall, Flett or Kirkness what better boost can he get than read the section on "Some Orkney Family Names' where he will find that he comes from a very distinguished lineage!

A title that is sure to appeal to Orkophiles everywhere.

11 other products in the same category: