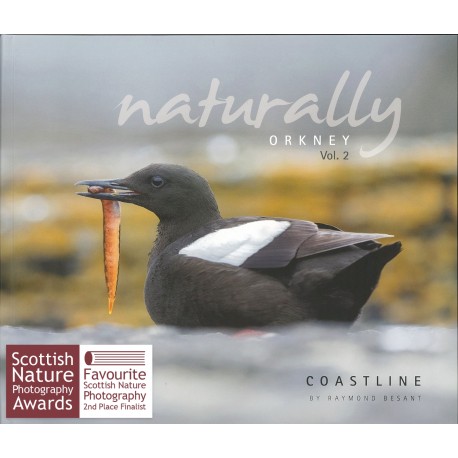 The Orcadian photographer, Raymond Besant, focuses his camera more specifically on the islands' coastline and reveals what can be discovered there.

Raymond Besant's first book, Naturally Orkney (now out of print), received widespread acclaim, and supported the publisher's belief that 'he has an instinctive knack of finding and photographing Orkney nature as few have seen it'.

In this second book of the series, the Orcadian photographer focuses his camera more specifically on the islands' coastline and reveals what can be discovered there. The high quality of his photography is self-evident, and his commentary gives readers an insight into what they may have missed during a coastal stroll, and the trials and tribulations of photographing nature.

'The images in this book have his clear hallmark of originality. They're from un-looked-for angles, and tell his own tale of meetings within our generous natural bounty. Not just the images but the texts are uniquely his... Raymond's gift as a naturalist is well known (also hard won and richly deserved) but, to me, he is the rarest of a rare breed: one that has spent countless hours patiently noting and observing. From the sum of these experiences, he has derived his own unique expression, and that, among naturalists, is pure gold.

Here is a work that enthrals not just because of its photographic artistry, but also because of its factual richness and reliability. Amidst the nuggets of detail behind the images, Raymond has managed to capture the rawness of our islands' nature...

'Coastline' brings a stir of emotions but, above all, it is a book to savour and learn from. It has captured my most beloved Orkney habitat in a way I had never thought possible.'