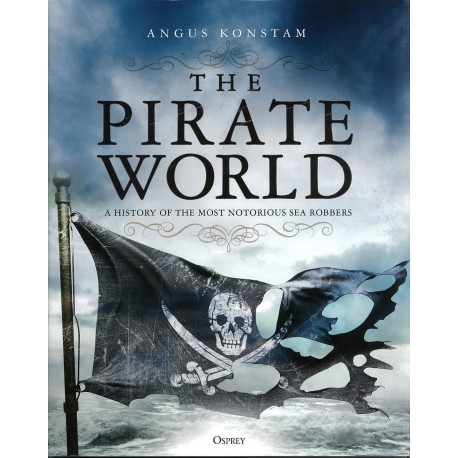 A History of the Most Notorious Sea Robbers.

Piracy has been around ever since man first took to the sea. The word 'pirate' instantly conjures up the image of a fearsome figure in a battered coat and tricorne hat, brandishing a cutlass on the deck of his helpless victims' ship. Similarly, the skull and crossbones which once adorned pirate flags has become an instantly recognizable symbol of piracy and rebellion. However, much of this image comes from Hollywood, and the realities of piracy are much more fascinating than the myths which now all but obscure the real thing.

In this book, pirate expert Angus Konstam traces the history of piracy through the centuries, from the sea raiders who plagued the Ancient Egyptians to the modern pirates of Somalia and the Philippines. On the way he covers everything in between, from Viking raiders and Barbary corsairs to the pirates of the Far East, and of course the infamous pirates of the 'Golden Age', when the likes of Blackbeard roamed the seas.

By separating the history of piracy from the Hollywood-inspired fiction, and by tracing its development through the centuries, The Pirate World gives a realistic vision of what the vicious, deadly business of piracy actually involved. Richly illustrated with colour images and specially commissioned maps throughout, this book is a unique exploration of the pirate world.