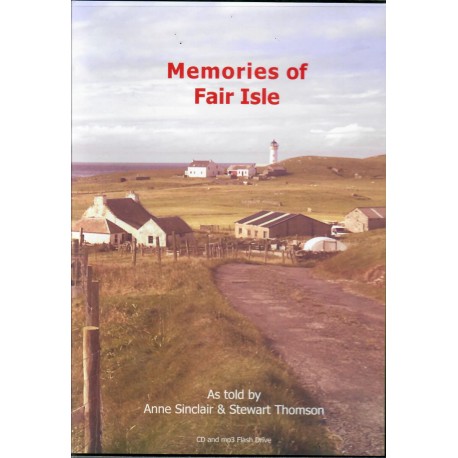 Audio documentaries on life as it was on Fair Isle, on CD and mp3 Flash Drive.

To the North of the Orkney Islands and South of Shetland, lies Fair Isle - a small island - about 3 miles square - which is known world-wide as the ancestral home of Fair Isle Knitting.

Fair Isle also attracts birdwatchers from all over the world, who are keen to see the huge variety of birds - some very rare - that make Fair Isle their home, and also their stopping point as they migrate North and South. Anne Sinclair and Stewart Thomson (they're brother and sister) have lived on the island for many years and can trace their ancestors back on Fair Isle for hundreds of years.

Stewart used to be a lighthouse keeper and crofter, but has now retired and these days makes traditional straw backed chairs. Anne was a teacher, a crofter, as well as a singer, but now helps run the Island's museum. Together they look back on their life on Fair Isle, and recount the memories and stories of this isolated but beautiful corner of the world.

24 other products in the same category: