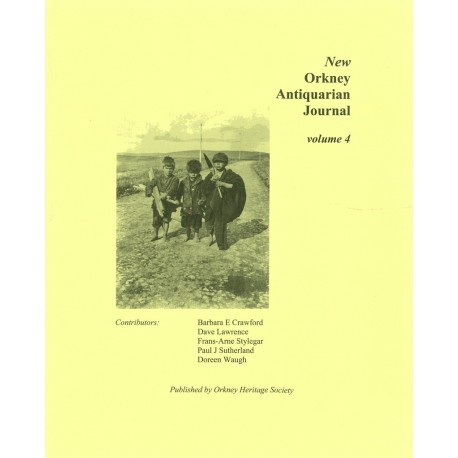 A fourth volume of historical and archaeological papers relating to Orkney.

Topics cover a wide range of subjects: the bone called "the Peedie Pict", Ness-names in Orkney and Shetland, traditional settlement patterns, the Bishopric of Orkney and the trial of an Orkney travelling couple.

The papers in this volume cover most of the established scope of the Journal, archaeology, place-names, medieval settlement systems, ecclesiastical history and sociology.

The contributors are Barabara Crawford, former Honorary Reader at the University of St Andrews School of History and internationally renowned historian; Dave Lawrence, an archaeologist specialising in human skeletal remains; Frans-Arne Stylegar, head of the Department of Monuments and Sites in Vest-Agder County, Norway; Paul Sutherland, practicing solicitor with an interest in social change in 18th and 19th centuries Orkney; and Doreen Waugh, Honorary Fellow of the Department of Celtic and Scottish Studies.

- Township and 'Gard': A comparative study of some traditional settlement patterns in Southwest Norway and the Northern Isles.

- A Perfect Past? The trial of an Orkney travelling couple, 1898.