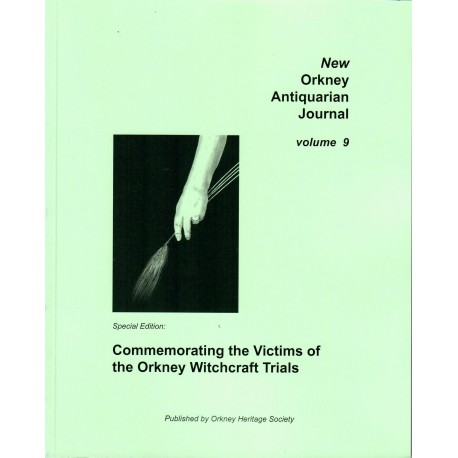 A ninth volume commemorating the Victims of the Orkney Witchcraft Trials.

This ninth volume of the New Orkney Antiquarian Journal is devoted to the Orkney Heritage Society’s project to commemorate the victims of the Witchcraft trials held in Orkney between 1594 and 1706. This project ran from 2013 till 2019 and culminated in the unveiling of a memorial stone at Gallow Ha at the top of Clay Loan in Kirkwall on 9th March 2019. Other events that day included a mini conference at which several papers were read; some of these, together with some commissioned subsequently, form the basis of the seven articles now included in this volume.

The opening article by two of the project’s organisers, Helen Woodsford-Dean and Ragnhild Ljosland, traces the background to the 17th-century witchcraft trials in Orkney and the evolution of the project to commemorate its victims.

Liv Helene Willumsen’s article raises the important underlying issues of why we commemorate, and how actions of injustice and painful history can be publicly and collectively remembered in a way that brings insight and personal growth to the beholder, and maturity to us as a society as we reflect on the wrongs of the past. By comparing the Orkney memorial to one built on a grander scale in Finnmark, Norway, she shows that memorials, themselves being at once works of art and vehicles for a message, create dialogue between history, local community, and the individual person.

The next three articles address some of the individual trials of Orcadian witches. Jocelyn Rendall reviews the context, evidence and process of one of the more noteworthy of these trials, that of the young Birsay woman Marable Couper in 1624.

Ashleigh Angus reviews the trials of some other Orcadian women in 1616 whose testimony involved men who had participated in the Orkney Rebellion two years earlier. She shows that these trials had as much to do with the desire of their inquisitors to demonstrate their loyalties to the new regime as it had to do with the alleged activities of the accused.

Peter Marshall investigates the accusations and insinuations in the 1640s concerning Marjorie Paplay, the well-born widow of a prosperous Kirkwall merchant who became caught up in the intrigues of local politics.

The final two articles take a wider perspective by considering the witch figure in the collective psyche. Corwen Broch uses the references to witchcraft in 23 of the ballads collected by the 19th-century American professor FJ Child to contrast the popular traditional portrayals of the supernatural with the surviving contemporary evidence.

Marita Lϋck rounds up with a discussion on the demonisation of witches and the treatment of witch hunts in European folklore, psychology and history.

The final article lists the names of those being commemorated by this volume.

Together these articles represent a significant contribution to the literature on the witchcraft trials of Scotland that was tackled so comprehensively by Edinburgh University’s Survey of Scottish Witchcraft and ensuing publications of nearly two decades ago. The articles now published show these trials took place in a wider religious and political context than many today have realised, and the victims of these trials were often innocent scapegoats for men in positions of authority. It is hoped that this volume will educate a wide readership and form part of the legacy deserving of these persecuted innocents.