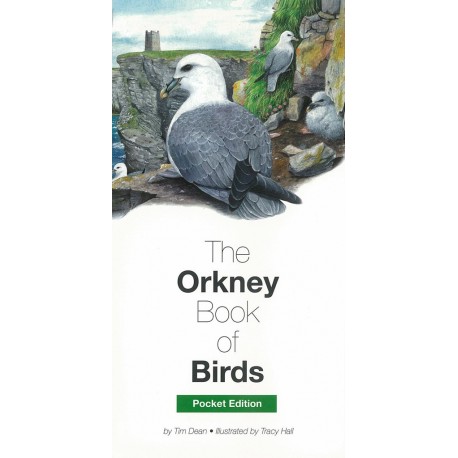 A unique volume that focuses solely on almost 200 birds you are most likely to find in Orkney.

The second edition considers the changes that have taken place in Orkney’s world of birds since its initial publication in 2011. All species within the 250 pages of the book have been examined and where necessary, updated, to accommodate those changes.

This pocket guide reflects on the fortunes of our seabirds, the growing Greylag Goose breeding population and the effects on ground-nesting birds such as Hen Harriers and Short-eared Owls caused by the recent arrival of stoats into the county. However, in contrast, that period has seen a marked increase in some of our smaller breeding birds; Swallows, House Martins and Sand Martins continue to consolidate throughout the islands and both Lesser Redpolls and Goldfinches have become firmly established as breeding birds in the county. And of course, after a wait of 145 years, Hoy is once again home to White-tailed Eagles, a pair of which raised two chicks in 2018.

Thanks to Paul Higson, the book also enjoys the most up-to-date list of all bird species that have occurred in Orkney up to 31st August 2018. The list now stands at 414 species and includes newcomers such as Bufflehead, Cattle Egret, Lesser Kestrel, Short-billed Dowitcher, Bonaparte’s Gull, Black-billed Cuckoo, Siberian Accentor, Orphean Warbler, Brown Shrike and Ovenbird.