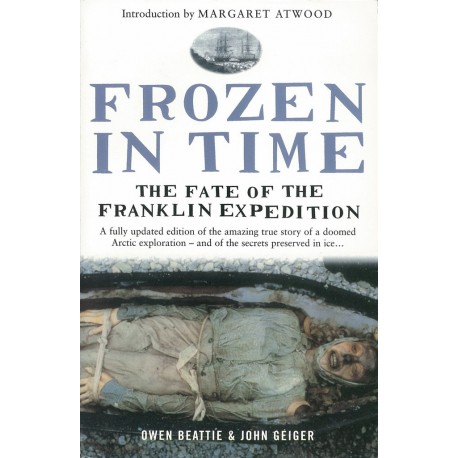 The Fate of The Franklin Expedition.

A fully updated edition of the amazing true story of a doomed Arctic exploration - and the secrets preserved in ice.

What happened on Sr John Franklin's ill-fated Arctic expedition of 1845-48 was one of the great maritime mysteries, until, in 1981, part of a bleached human skull was found by the team working with Dr Owen Beattie. Further scientific expeditions unravelled the circumstances by which the members of Franklin's elite naval forces came within sight of the Northwest Passage, only to perish in a manner as terrible as the mind can conceive.

Frozen in Time is a breathtaking record of scientific detective work, using forensics on three perfectly preserved Victorian seamen discovered on Beechey Island. It also makes the case that their deaths were due to the crews' reliance on a new technology - tinned foods - which not only exposed the seamen to lead poisoning, but also left them vulnerable to scurvy, the ancient scourge of seafarers.

This fully revised edition updates the research, and confirms Beattie's lead hypothesis, along with his discovery of physical evidence for both scurvy and cannibalism. It also has a new introduction by Margaret Atwood who has long been fascinated by the Franklin Expedition, and has made a pilgrimage to the site of the graves on Beechey Island.