Whit’s on this weekend?

There’s plenty to see and do in Orkney, this weekend! Let’s have a look… 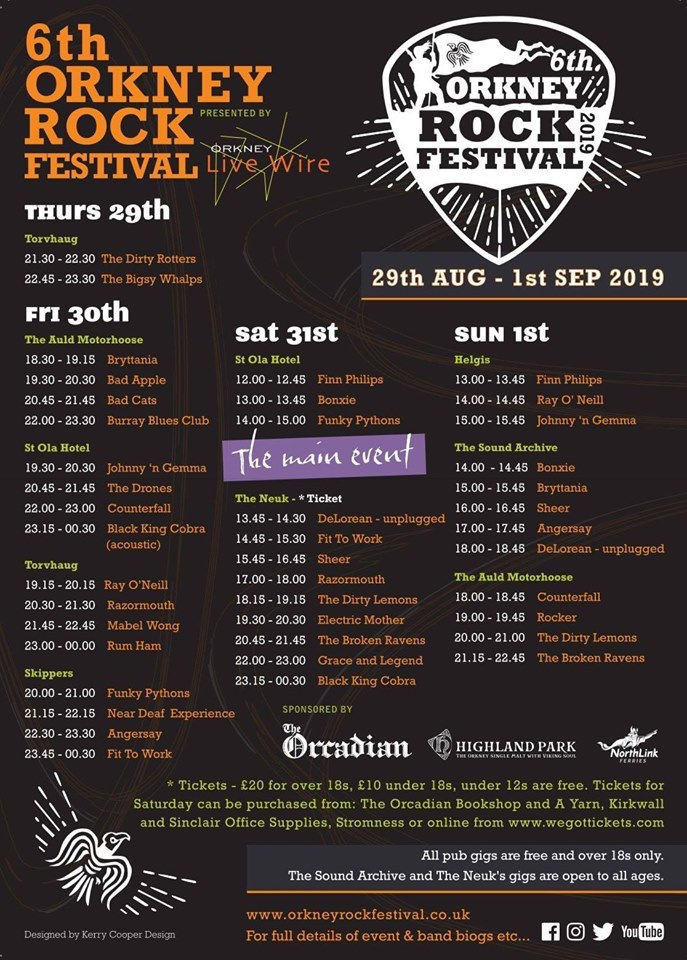 Orkney Rock Festival is returning to the pubs and venues of Kirkwall, this weekend, for its sixth year of live music entertainment.

Organised by a homegrown group of promoters, Orkney Live Wire, and sponsored by The Orcadian, the festival brings a range of rock music from across the county and further afield together for an exciting weekend.

“There is so much to look forward to this year, with a very strong line-up of visiting bands each bringing something very different to the festival,” said Orkney Live Wire president Kristian Cooper.

“Fit To Work return with their politically motivated speed-punk, and due to guitarist Daniel Firth’s commitments with other bands, they have to play early on at the Main Event — so we expect the Neuk to get very loud and sweaty from the start. Before them, Shetland band DeLorean will be entertaining the crowd with their unique and heavy covers of pop songs, TV soundtracks and even the occasional Disney song!

“Another massively talented young band are Shetland youngsters Sheer, and we’ll also hear from Shetland favourites The Dirty Lemons who already have a big following in Orkney, thanks to their set-full of energetic and crowd-pleasing anthems.

“Stornoway-based band The Broken Ravens won over the crowd at the second Rock Festival, so we are delighted to have them back! Since we last saw them they have been writing and performing as far away as LA and in the world-famous Whisky a Go Go bar, where they supported Puddle Of Mud.

“Grace and Legend are a female fronted rock outfit from Edinburgh, and I can guarantee they will quickly become a favourite with the Orkney crowd.”

With gigs running simultaneously across Kirkwall’s pubs throughout the weekend, Saturday brings a special Main Event which can be enjoyed by all the family at The Neuk (formerly known as Matchmakers).

“They have been wanting to play in Orkney for a long time, but for various reasons they’ve not been able to. They have a very distinctive hard rock/funk sound, and will appeal to all music fans. The Main Event is open to all ages, so bring the family!”

For Orkney Live Wire, the aim is not only to bring great music to Orkney but to cultivate the amazing wealth of talent which continues to grow and thrive in the county.

Kristian added: “The whole festival is what it is because of the strength of the local music scene, so undoubtedly the higlights for most will be the new and old local bands up there with the best of acts appearing over the weekend.

“Later on Friday night in the Motorhoose we have a blues/rock theme that will be a fitting tribute to the late Ian “Coop” Cooper. It will be a chance to pay respects to a stalwart of Orkney’s music scene, where folk can raise a glass and listen to some classic tunes to mark Coop’s immeasurable contribution to the local scene.

“On Sunday, we have a big line-up in The Sound Archive during the afternoon, where music fans of all ages can come and experience the Sunday vibe! Once again, the weekend finishes up in the Auld Motorhoose on Sunday evening.”
Friday night of Orkney Rock Festival will pay tribute to one of its regular performers, who sadly passed away in July.

Ian “Coop” Cooper was a stalwart of the county’s music scene for many years, and as a mark of respect to his enthusiasm, talent and the inspiration he gave to his fellow musicians, there will be a special gig at the Auld Motorhoose, Kirkwall.

With a blues/rock theme, this event will give folk a chance to celebrate Coop’s memory and his contribution to the Orkney music scene over many years.

This three-day mini-music-festival will no doubt get off to a toe-tapping start, with its Friday night concert at the community hall, where Billy’s Blend, and Donnie Munro and Friends, will be playing. The musical festivities will then continue over the weekend, with plenty of events to entertain folk on Saturday and Sunday.

This is the fifth rendition of the festival, which began life as a small idea at a Westray Tourist Association meeting.

Over the past seven years, the biennial event has developed into an attraction that sees plenty of folk travelling from afar, and indeed returning, to this small island in the north.

Westray Connections aims to provide “something for everyone”, with music for all tastes in a variety of venues, making it enjoyable, inspirational and accessible to as many people as possible.

This year, festival-goers can look forward to a range of concerts, taster sessions, and a parade, amongst other treats over the weekend, with a selection of popular bands, both local and from further afield, taking to the stage.

On your marks for the 11th annual Rousay Lap Half Marathon!

Taking place, tomorrow, Saturday, the event will see runners take a route round the island with donations in aid of RNLI.

The run itself is open to all and will begin at 12pm with registration between 10am and 11.45am.

Further information and entry forms are available from www.rewdt.org

Stromness Drama Club are set to present a panto with a difference, this winter, and the group are looking for folk to get involved.

Smut’s Saga — or Santa and the Vikings! will have a nordic twist. People of all ages and confidence levels are invited to attend and find out more about this year’s pantomime, this Sunday, September 1, at Stromness Town Hall.

If you can’t make attend, but still want to be involved — either on or off stage — you can email stromnessdramamclub@gmail.com or message via Facebook or Instagram.

Road incident between Kirkwall and Finstown