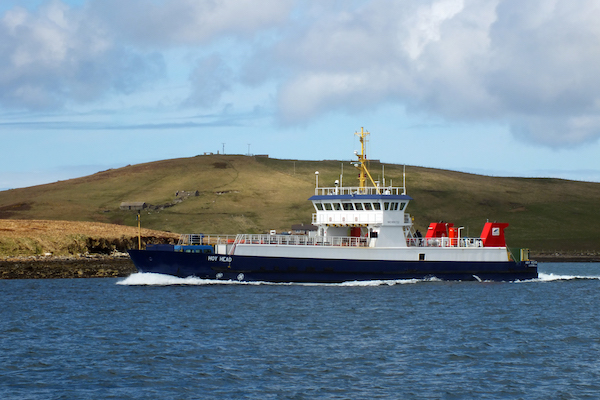 Tribute has been paid to the crew of the Orkney Ferries’ vessel, Hoy Head, after their quick-thinking led to the rescue of two people in distress from the sea yesterday — Thursday, June 3.

The vessel was on passage between Lyness to Flotta on Thursday afternoon when passing a local yacht, crew noticed that two people were in the water.

Skipper Sean Budge said: “We quickly headed over to them and launched the rescue boat, recovering both people. One was returned to the yacht and the other taken onboard Hoy Head as his condition was deteriorating.

“Coincidentally and fortunately a local nurse was travelling on the sailing and able to assist and assess the condition of those involved. She requested the ambulance and we are very grateful for her help.

“The third person, who was on board the yacht, was clearly distressed and unable to help. Our cook Richard Moar took the yacht to Flotta and rejoined the ferry.”

Both people rescued from the water were taken to Houton on board the Hoy Head and transferred to the waiting ambulance. They did not require admission to hospital. The third person was returned to Lyness at 4pm.

Mr Budge added: “It was incredibly fortunate that we were passing at that moment.”

Ferry services manager Andrew Blake said: “I’d like to pay tribute to the crew for their prompt action. Seafarers have always looked out for each other – and gone to each other’s assistance – in times of need. The actions of our crew exemplify that tradition.”

Orkney Ferries board chairman Councillor David Dawson added: “The crew of the Hoy Head are to be applauded for their swift action that led to the saving of two lives. They demonstrated a calm and efficient response, born out of a standard of training and discipline which all our seagoing staff work to. I am very proud of them.”