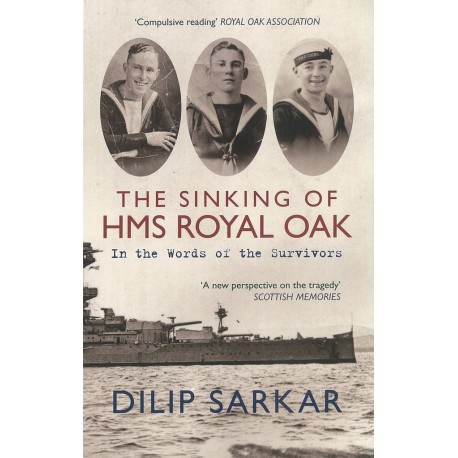 The Sinking of HMS Royal Oak

In the Words of the Survivors.

The story of the sinking of the HMS Royal Oak by a German submarine which cost the lives of 833 Royal Navy soldiers.

HMS Royal Oak was a Revenge-class battleship of the British Royal Navy, infamously torpedoed at anchor by the German submarine U-47 on 14th October, 1939. Royal Oak was anchored at Scapa Flow in Orkney when she became the first of five Royal Navy battleships and battle cruisers sunk in the Second World War. The loss of life was heavy: of Royal Oak's complement of 1234 men and boys, 833 were killed that night or died later of wounds.

This book by Dilip Sarkar, a Fellow of the Royal Historical Society, provides a completely new and unique perspective on the tragedy. Moved by the Royal Oak story whilst on an expedition to dive Orkney's famous German naval wrecks, the author has since traced the families of various souls lost with the battleship, that fateful night in 1939.

Their photographs and stories are representative of all their shipmates. Interviews with survivors bring the dramatic events vividly to life, emphasizing the human tragedy and experience of war.