> Scapa Flow and War in Orkney>The Grand Scuttle: The Sinking of the German Fleet at Scapa Flow in 1919 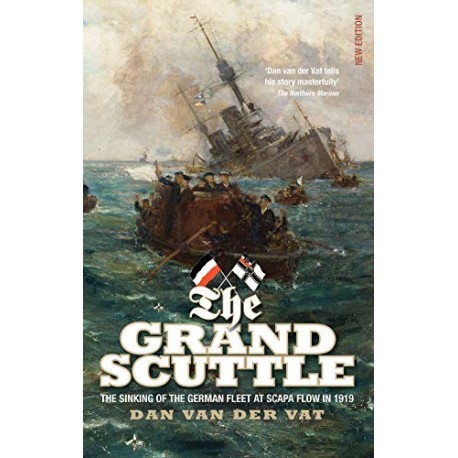 The Grand Scuttle: The Sinking of the German Fleet at Scapa Flow in 1919

The story of the "Grand Scuttle" of the German High Seas Fleet in 1919.

At the end of the First World War, the German High Seas Fleet was interned in the British Grand Fleet's principal anchorage at Scapa Flow. Fearing that hostilities would resume because of the apparent impasse at the Versailles peace talks, Rear Admiral Ludwig von Reuter gave the order to scuttle the ships, and on 21 June 1919. one of the most formidable fleets ever built slowly sank beneath the Orcadian waters.

Featuring previously unused German archive material, eyewitness accounts and the recollections of survivors, as well as contemporary photographs which capture the awesome spectacle of the finest ships of the time being deliberately sunk, this is the definitive account of one of the most remakable events in naval history.

Dan van der Vat, born in Holland and educated in England, became a full-time author after 25 years in journalism. He has published a number of books on maritime history, including The Ship That Changed The World and The Atlantic Campaign, as well as a biography of Albert Speer.