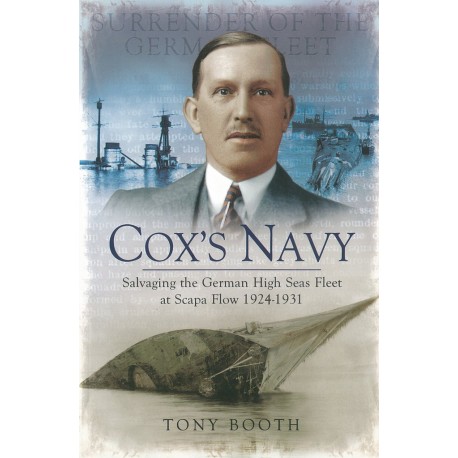 The story of Ernest Cox, a Wolverhampton-born scrap merchant, who led the biggest salvage operation in history to recover the scuttled German ships in Scapa Flow.

On mid-Summer's Day 1919 the interned German Fleet was scuttled by their crews at Scapa Flow in Orkney despite a Royal Navy guard force. Greatly embarrassed, the Admiralty nevertheless confidently stated that none of their former enemy's ships would ever be recovered. Had it not been for the drive and ingenuity of one man, there is indeed every possibility that they would still be resting on the sea bed today.

Cox's Navy tells the fascinating true story of Ernest Cox, a Wolverhampton-born scrap merchant, who, despite having no previous experience, master-minded the biggest salvage operation in history to recover these mighty warships. The 28,000-ton Hindenburg was the largest ship ever salvaged. Not knowing the boundaries enabled Cox to apply solid common sense and brilliant improvisation, changing forever marine salvage practice during peace and war.

This is an extraordinary account of bare-faced determination and risk-taking by one man who was able to inspire and lead his team to success against all odds and predictions.