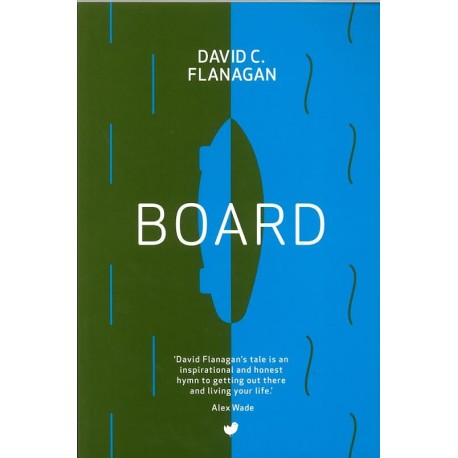 At it's heart, Board is an inspiring story about accepting some limitations and overcoming others, while completely ignoring common sense and social convention.

David Flannigan came from a long line of seafarers and thought learning to surf would be easy, despite the fact he was scared of the ocean and fast approaching middle age.

As a journalist living in an island community, he had intended to write a light-hearted account of his progress towards surfing nirvana, but instead found himself facing danger doubt and the spectre of childhood bereavement in an often wild and unwelcoming sea.

Meanwhile on land, and back riding a skateboard after a 30-year-gap, David found himself facing bemusemnt, ridicule and the wrath of the medical profession. But his decision to turn back the clock to the 1970s would also prove remarkably life changing and, occasionally, utterly catastrophic.

Warm, funny, touching and honest - with a strong dose of adrenalin - Board explores loss, ego, fear, and fatherhood, charting a quest for inner peace against a backdrop of thundering Atlantic waves.