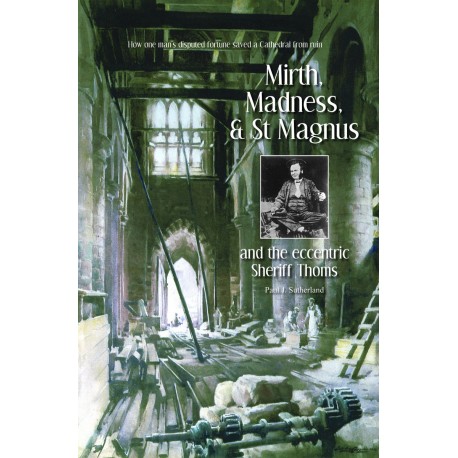 And the eccentric Sheriff Thoms.

How one man's disputed fortune saved a Cathedral from ruin.

This tells the story of Sheriff Thoms, who was sheriff for Orkney and Shetland just over a century ago. An eccentric bachelor, his behaviour was bizarre and when he died he left a fortune for the renovation of St Magnus Cathedral.

The Will, leaving approximately £13m (in today's money) for the work, was contested by the family and in a week long court case in Edinburgh, the bizarre life style of the sheriff was revealed in detail; even hinting at an unseemly sex life! The family lost the case and the money probably saved the Cathedral falling into ruin.

The Rose Window is dedicated to Thoms, who arguably was "The Man who saved St Magnus Cathedral".

'Kirkwall's magnificent St Magnus Cathedral, the unique. Viking-founded, red-sandstone edifice admired around the world, might have become a crumbling ruin were it not for a highly eccentric Victorian called Sheriff George H. M. Thoms.

On his death in 1903, the news that he had left a massive fortune to fund a total restoration was met with surprised delight, but this soon turned to anxiety when his disappointed relatives contested the Will on the grounds of insanity.

All the while he had sat in public judgement as Sheriff of Caithness, Orkney and Shetland.