> History and Archaeology>Saints and Sinners 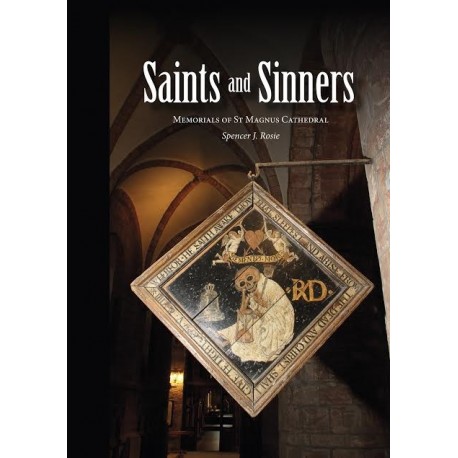 If you have ever sat in the St Magnus Cathedral, you will have gazed around and admired the sheer magnificance of your surroundings; the red sandstone, the high vaulted ceilings, the colourful East Window and the massive pillars, two of which hold the bones of Saints. Your eyes then alight on the tombstones...The names often mean very little so, Who do they commemorate? What did they do to be honoured? What does the strange symbolism mean?

Saints and Sinners has the answers.

Spencer Rosie has spent many years researching the memorials of the Cathedral. He discovered that those immortalised in this revered Viking Cathedral do indeed include Saints and Sinners: both the very good and the very bad.

This book tells their life-stories, details of the tombstones' heraldic inscriptions, and explains some of the strange symbolism. For example, one controversial theory states that some tombstones have skulls that are etched on the side to accomodate the Orcadian belief that the soul departed the body through the left ear.

A must read for anyone with an interest in the St Magnus Cathedral and historians alike.

Spencer J. Rosie is an Orcadian, he lives in Kirkwall, was educated at the Kirkwall Grammar School where history was his favourite subject, he then went on to study geology at Aberdeen University.