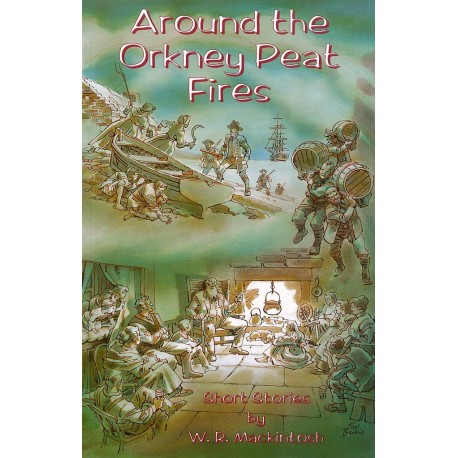 Around the Orkney Peat Fires

Around the Orkney Peat Fires is a book full of adventure-packed stories, featuring the Press Gangs, smugglers and witches - tales as entertaining now as they were over a century ago. It is an Orkney 'classic' and beats any Hollywood blockbuster for sheer adventure, excitement and fun.

'Around The Orknet Peat-Fires' first appeared in serial form in The Orcadian newspaper over one hundred years ago. It was highly popular with readers and was later republished as a book which has sold out many times. Compiled by W. R. Mackintosh, an accomplished journalist and short-hand writer who moved from Ayrshire to work on The Orcadian. Subsequently taking over the business in 1895.

The tales, anecdotes and sketches are mostly, though not wholly, of a traditional character. Prior to the days of cheap periodical literature, people were in the habit of gathering in neighbours' houses, and, seated round a rousting peat-fire, while away the long winter evenings recounting the achievements of notable Orcadians, telling of the eccentricities of local characters, describing all kinds of smuggling exploits, and relating many thrilling incidents connected with the press-gang.