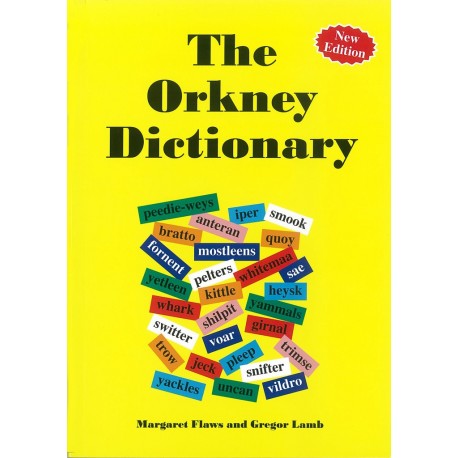 A detailed account of Orkney dialect words and sayings, their origins and meanings.

By Margaret Flaws and Gregor Lamb.

Throughout the twentieth century it has been observed that the Orcadian dialect is in decline. the reasons for this are several and interconnected - the increased mobility of people to and from the islands, and importantly within them, the tendancy towards centralisation and the all-pervasiveness of the media, nationally and internationally - all these factors have tended to promote standardisation and the suppression of individuality. In Orkney our uniqueness is exemplified by our dialect. Unfortunately standard English has become locally the preferred form of the written word.

So how to halt the decline, and even reverse the trend? In 1992, an Orkney Language and Culture Group was formed, with a membership if people all with a high profile in the field of education. Their stated aim was to promote and develop all aspects of Orcadian language and culture in schools, in particular, the Orcadian dialect which reflects the history of the community and is an integral part of the language children bring to school.

To encourage contemporary usage of Orcadian dialect in poetry, prose and speech, a vocabulary must form the basis. Schools suggested that an easily accessible reference book would help.

Two established authors on dialect matters were approached - Margaret Flaws and Gregor Lamb - and the Group, under the chairmanship of Harvey Johnston, undertook the compilation of a dialect dictionary to be aimed at Orkney's school pupils. As the scope of the project widened, the Group came to see 'The Orkney Dictionary' as more than just a school reference, but a volume for day to day use by all ages.

In the approach to the twenty-first century, the Orkney Language and Culture Group hope it has contributed in some small way to the preservation of our unique cultural heritage.

11 other products in the same category: