Orkney is the star in new TV advertising campaign 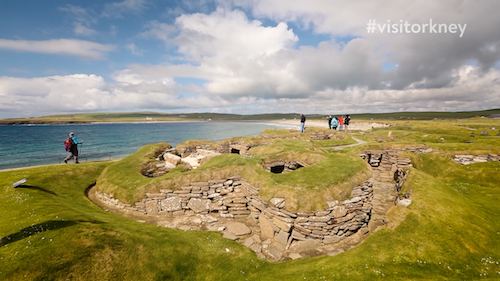 A new television advertising campaign, aimed at promoting Orkney both as a visitor destination and as a place to live, work and study, is running on STV over the next few weeks.

Devised by the Orkney Marketing partnership, with backing from STV’s Growth Fund and the European LEADER programme, the campaign — the first-ever Orkney Marketing foray into TV advertising — consists of two professionally produced adverts, designed to drive traffic to the Orkney.com website.

The initial advert, running until February 21, highlights key islands attractions, scenery and products, tying in with Destination Orkney’s new campaign encouraging visitors to plan their escape to Orkney. The second advert, due to be screened in the spring, will showcase Orkney’s lifestyle, along with work and study opportunities in the county.

Editing and advert composition was undertaken by STV as part of its Growth Fund initiative, aimed at encouraging Scottish businesses and organisations to advertise on the channel.

Morag Robertson, economic development officer at OIC, said: “We decided to create these impactful television adverts with the backing of STV’s Growth Fund and the LEADER programme, as a complement to our marketing activities and as a way of driving more visitors to the official Orkney website, Orkney.com. It’s the main portal now for our visitor information, and the place anyone keen to learn more about living, working and studying in the islands should head, so we felt a TV campaign would be a great way to both highlight the site and everything Orkney has to offer.”

“We’re really delighted with the quality of the two adverts,” added Maureen Shearer, development manager at HIE in Orkney. “The feedback on the first, focusing on Orkney as a visitor destination, has been fantastic and we’re already seeing an increase in the hits on the Orkney.com website. We’re very grateful to the STV Growth Fund and to LEADER for their assistance in bringing this campaign to fruition and also hope viewers enjoy seeing this snapshot of life in the islands.”