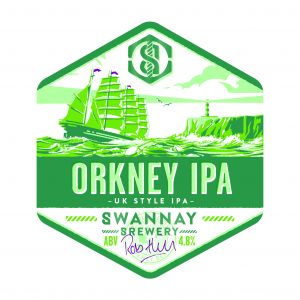 A beer from Orkney’s Swannay Brewery has claimed the gold medal at a prestigious national competition.

The brewery’s Orkney IPA has been named Champion Beer of Scotland at the Campaign for Real Ale’s (CAMRA) Scottish Real Ale Festival in Edinburgh — the fifth time Swannay has taken the title.

Judges at this year’s event, which is currently being held at Edinburgh’s Corn Exchange, were impressed by the balanced flavours and drinkability of the beer.

The Scottish Real Ale Festival showcases hundreds of the best real ales by around one hundred breweries from across Scotland.

Rob Hill, managing director at Swannay Brewery, said: “We are over the moon to win the Champion Beer of Scotland award. We have been making Orkney IPA for eight or nine years and it has just gone from strength to strength. It’s a good old mix of European hops with a handful of American hops added to provide some zestiness.”