Help End the Stigma of Addiction

ADVERTORIAL: What can people do to help challenge stigma?

Michaela Jones used alcohol to help her cope with trauma from an early age. In her 30s, her alcohol use increased and increased, to the point where she almost lost everything.

Now aged 54, Michaela has been abstinent for 13 years, and credits the support she found from her “tribe” in getting recovery.

Explaining why she started using alcohol, Michaela said: “A lot of this is reflective, but I had what would be considered a fairly traumatic childhood, and I was also sexually abused for a really long time.

I suppose I disassociated as a result. I was like two people all the time. The outer me was outgoing and extrovert, whereas the inner me was a scared, frightened and hurt person, and it was complex trying to juggle the two.

“The outer me did really well. I went to uni, travelled, volunteered overseas and then, when I came back to the UK, I got a job and worked my way up in the organisation, eventually managing a team of around 200 people.”

During this time, Michaela’s alcohol use increased as she describes alcohol as being the only thing that brought those two different people together. “You can’t apply logic to addiction. I knew I had a problem, but I had no idea how to get out of it and that was a very lonely place.” Michaela lost her job, and the structure that went with it, eventually losing her home, her car and her relationship, and then attempted suicide. She said: “All the chickens came home to roost when I lost my job. I knew I couldn’t live the way I was living, but I didn’t know any alternative. God knows how I got through those first few months of detoxing, I was hanging on by a thread.

“One day I was frankly quite angry about the lack of support there was for me. I couldn’t believe how bad it was. I became involved in service user involvement and went to the first recovery walk and saw my tribe — and that’s when I got recovery. That was the start of a journey where you realise all these people who are stigmatised and seen as negative to society are amazing people with amazing assets. The only thing they share is pain and suffering that they’ve tried deal with through using drugs and alcohol, which seemed logical at the time until the drugs and alcohol became the problem.

“They were the most amazing people you would ever want to meet, and what a shame we lose those people all the time. All they’re doing is medicating suffering, as everybody does in life to varying degrees.” Michaela now works as a national policy officer with the Scottish Recovery Consortium supporting, representing and connecting people with lived experience. I think if you can shift the needle even slightly in terms of people’s perceptions of addiction, it could really change things. Show a bit of compassion, don’t walk away, speak to that person you’re concerned about. We’ve got to humanise this. It’s about people who are suffering every day.

“I think people tend to be judged as ‘groups,’ but when you speak to someone on a one-to-one basis, I think that stigma and judgement lessens. To break stigma, you’ve got to stop seeing people as a homogenous group, and see them as individuals with their own story. And taking time to understand that story can change lives.” 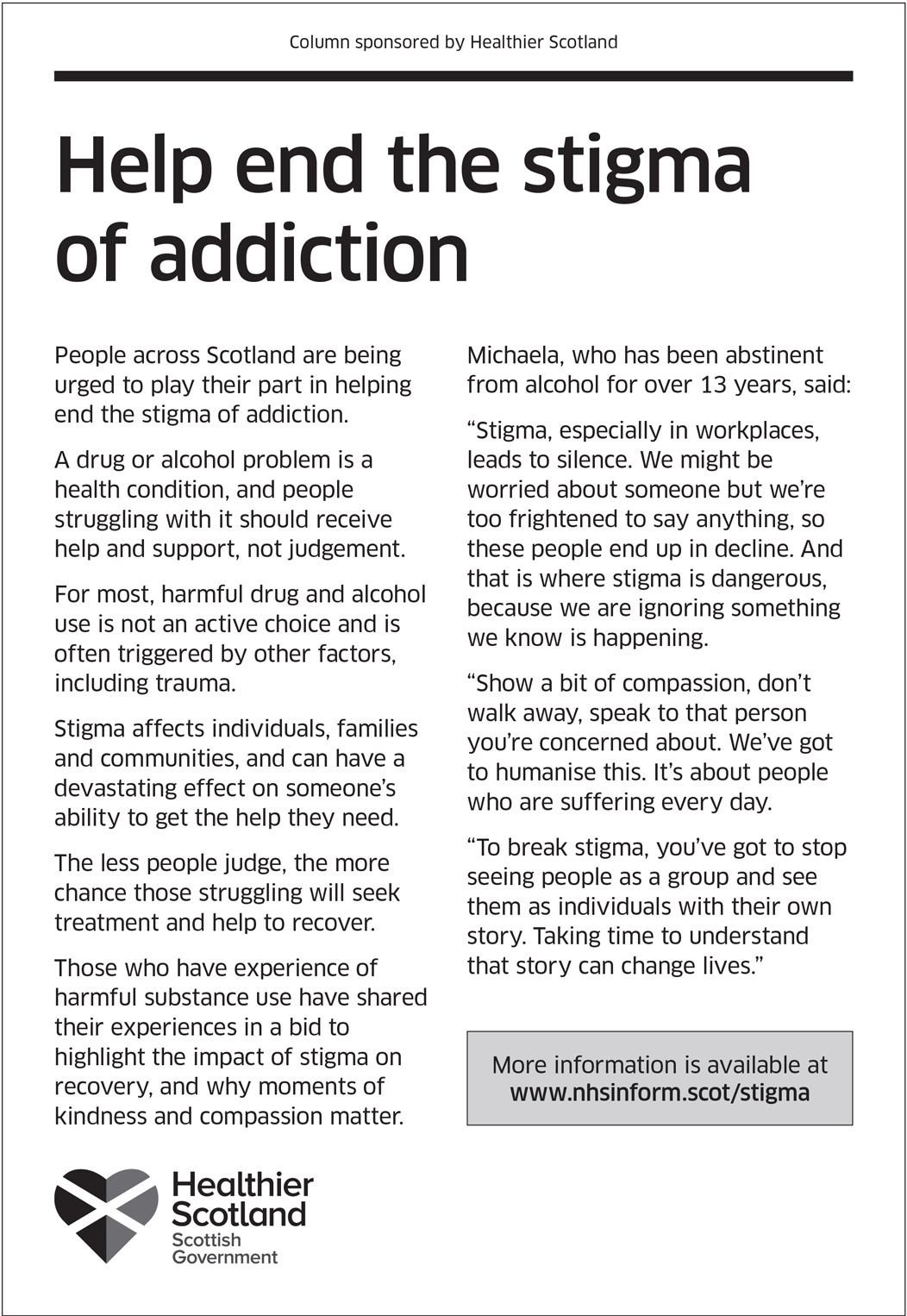