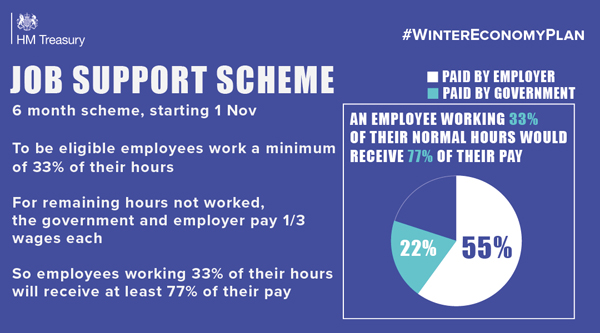 With the furlough scheme coming to an end on October 31, Chancellor Rishi Sunak today announced new measures designed to continue to support jobs throughout the winter.

The Job Support Scheme will begin on November 1.

To be eligible for the scheme, workers who have had their hours reduced due to the COVID-19 pandemic must work a minimum of a third of their normal contracted hours.

The UK Government and employers will then top-up their wages by paying a third each.

The scheme will be in place for six months.

It is designed to protect viable jobs in businesses who are facing lower demand over the winter months due to COVID-19.

There was also support measures announced for the self-employed sector.

The Self-Employment Income Support Scheme has been extended until April 30, 2021.

This covers 20 per cent of average monthly trading profits via a government grant, and will again support traders facing reduced demand.

Hospitality and tourism businesses will also benefit from an extension to a cut in VAT.

The cut from 20 per cent to 5 per cent came into force in July and had been due to expire on January 12 next year, but this has now been extended to March 31, 2021.

Businesses who deferred their VAT will no longer have to pay a lump sum at the end of March next year.

They will have the option of splitting it into smaller, interest free payments over the course of 11 months.

And for businesses which took UK Government guaranteed loans during the crisis, the payback period has now been extended from six years to ten.

This will halve the average monthly repayment, said Mr Sunak.

Win With The Orcadian – Win A Relaxing Winter Break