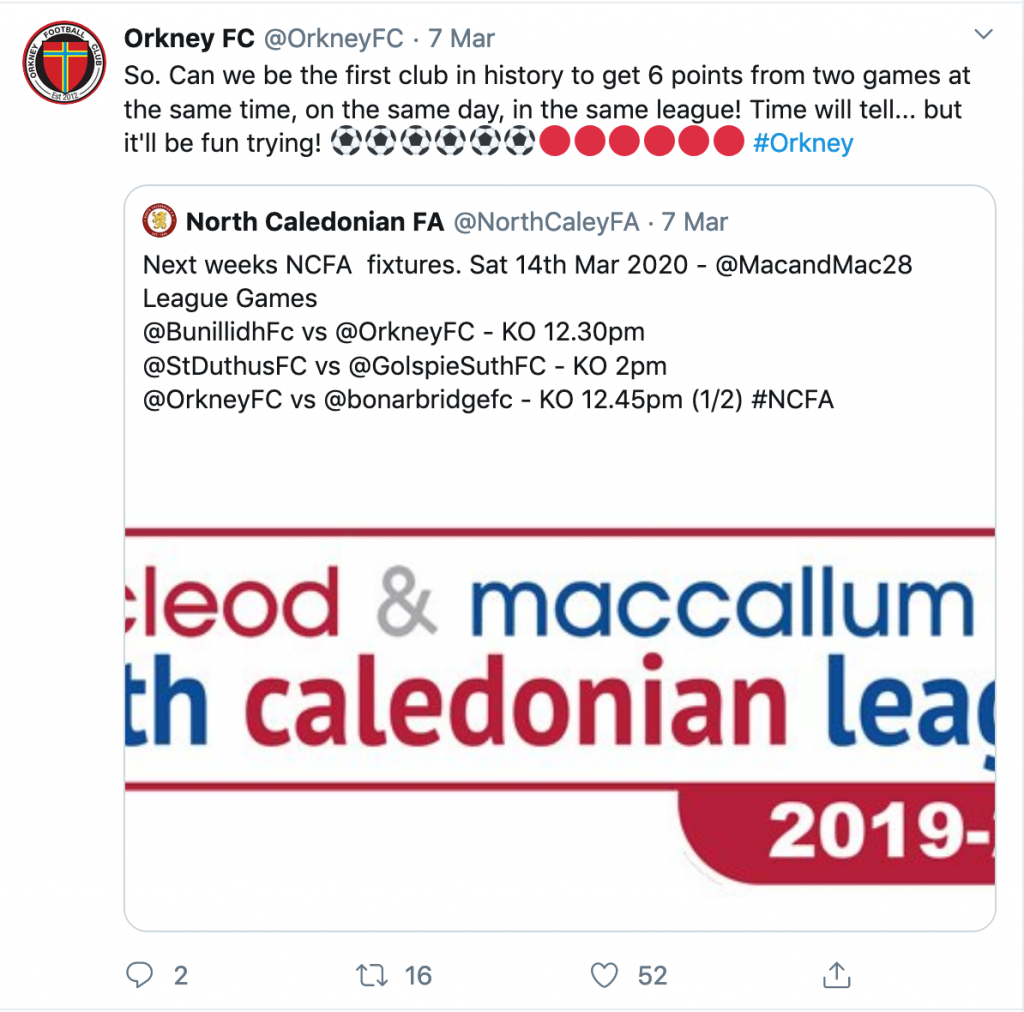 Orkney Football Club are in the limelight with film crews expected to be in attendance at not one but two of the club’s games on Saturday.

In order to reduce a fixture backlog, the club will put together two separate squads — one to play Bunillidh Thistle in Helmsdale at 12.30pm, and fifteen minutes later, the other to play Bonar Bridge in Kirkwall.

The unique occasion has left the club pondering as to whether they could become the first club in history to pick up six points from two games going on at the same time, on the same day, in the same league.

BBC Sport Scotland featured the story on their website and now a BBC film crew are believed to be travelling to Orkney and Helmsdale to cover the North Caledonian League matches.

Orkney FC president Edgar Balfour told BBC Radio Orkney: “We’re very fortunate to have a big pool of players and thought we might be able to put out two strong teams and who knows, might even get six points in one day which would be amazing.

“I can’t remember anytime where the same club has played two games at the same time in two different locations. If we win, it would be absolutely fantastic. It would do our points tally no end of good. It will be very strange to be getting updates from people south watching Orkney while I’m watching Orkney at home.”

This topic actually was included in The Guardian’s Knowledge newsletter where a crack team of anoraks answer some of the most obscure questions on footballing knowledge.

One twitter user asked: “Has a professional team in living memory had to play twice in a day?”

“If you go back a century or more, this wasn’t unusual, and arose from teams who were unable to play in midweek (no floodlights) and having to cram in postponed games before an end-of-season deadline,” writes Andrew Wright, citing several in Scotland including Celtic’s wins over Raith and Motherwell on April 15, 1916.

“Argentina and Uruguay have played each other twice on the same day three times,” Andrew continues. “In 1913, they played friendlies in Montevideo and Buenos Aires on 27 April. Given the distance between these cities is 280km, I doubt the same players were involved. Uruguay won 4-0 at home and drew 0-0 away. They repeated the exercise on July 13, with Uruguay winning 5-4 at home and drawing 3-3 away.

“On October 1, 1916, they played for the Uruguayan Honour Cup in Montevideo, with Argentina winning 1-0, and the same day, in Avellaneda for the Lipton Cup, where Argentina again won 7-2.”

He also unearths a more recent example from an African football blog: Nairobi’s Gor Mahia played KTM Thika and Kericho Allstars on the same day in the 1980s.

Brazil have also crammed two fixtures into a day, adds Amadeu Faccini Avi, drawing 2-2 with the Soviet Union and beating Hungary 5-3 in 1965, one in Rio and one in São Paulo.

Staying in Brazil, São Paulo beat Sporting Cristal 3-1 in the Conmebol Cup on the same day (November 16, 1994) as a 3-1 triumph over Grêmio. Not to be outdone, Grêmio played three games on one day in 1994, against Aimoré, Santa Cruz and Brasil de Pelotas, all in their state cup.

“Thirty-four players were involved and three of them played more than once,” Amadeu adds.

In England, Everton once played three matches in two days in 1888, writes Tim Lawrence — in the Lancashire Cup against Blackburn on Christmas morning followed by an annual exhibition against Ulster FC in the afternoon, winning both. The following day they wearily drew 0-0 with Bootle.

Most recently, Hornchurch of the Ryman League had to play two games in a day at the end of the 2000/01 season and in Wales, Mark Barnes recalls a youthful Wrexham side, who took on Airbus in the Welsh Cup in December 2011, kicking-off a mere half hour before a more experienced Red Dragons selection beat Brentford in the FA Cup.

A link to the article is here.

New buses to hit the road on Monday

Community projects win support of councillors ahead of funding deadline