75th anniversary of the official opening of the Churchill Barriers

Civil Engineer John M Andrew, an expert in the building of the barriers said: “The design and construction of the Churchill Barriers, undertaken to close off the eastern entrances to Scapa Flow, the home base for the Royal Navy’s Home Fleet, between May 1940 and September 1944, was one of the most significant and complex civil engineering achievements of the 20th century, more so considering it took place during World War II.”

He added: “The opening on 12 May 1945 marked the completion of the project and with the country at peace following six years of conflict, Orkney was provided with a much needed infrastructure improvement that remains as significant today as it did in 1945.”

Andrew Drever, councillor for East Mainland, South Ronaldsay and Burray, said: “Sadly due to the coronavirus restrictions the plaques unveiling has been postponed. Originally it was planned that the plaque would be unveiled today. Unfortunately, this will be postponed to a date when circumstances allow us to do so.”

Along with the plaque there was going to be other events hosted by Another Orkney Production which celebrated this hugely significant anniversary. These have also been postponed until a time where it is safe for them to be held.

Councillor Drever added: “Orkney is as thankful today as it was 75 years ago, to have the barriers connecting South Ronaldsay and Burray with the Orkney Mainland. They provide the vital daily route for many people for work, education and supplies.”

A feature on the building of the barriers is set to appear in The Orcadian on Thursday. 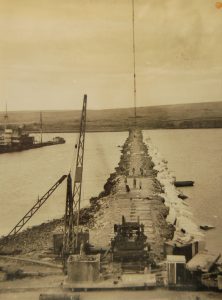